Jumping at the Carver: A Local Landmark Lives On 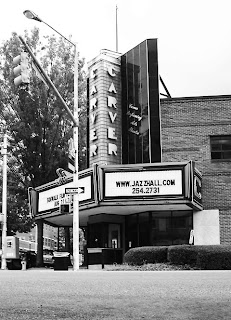 Everybody who lives in Birmingham should try to spend some time at the Carver Theater. Though it is one of our city’s greatest gems, it’s a space regrettably unknown to many locals. Situated on the corner of Fourth Avenue North and Seventeenth Street, the Carver represents the best of Birmingham, expressed through a rich mix of music, theater, history, and heritage. It's not only a link to our past; it is a living testament to who we are and to who we can be.

In the early decades of the twentieth century, Fourth Avenue was the heart of Birmingham’s flourishing black business district. Responding to the era’s Jim Crow restrictions, black Birminghamians created a thriving stretch of independent businesses: hotels, fraternal organizations, barber and beauty shops, retail stores, and—most memorably—a jumping, vibrant nightlife. The Masonic Temple leant its stage to Duke Ellington, Count Basie, and others; across the street, Bob’s Savoy offered drinks, dining, and music to a wide mix of steelworkers, coalminers, civic leaders, and Black Baron baseball players. Then, too, there were the theaters—the 1920s saw the birth of the Frolic, the Famous, and the Champion—where patrons could watch the latest movies or take in the region’s most popular vaudeville acts.

Opening its own doors in 1935, the Carver became the preeminent venue for black audiences in Birmingham to catch first-run movies. The space underwent major renovations in 1945, and, while other theaters in the district began shutting their doors, the Carver stayed strong. But in the years after integration—as the black business community dispersed, as hard times hit Fourth Avenue, and as small downtown theaters suffered all over the country—the theater faltered. After long years of struggle and decline, the Carver finally called it quits in the 1980s.

In the fall of 1993 the Carver was reinvented in its current form: as the Carver Performing Arts Center, home to the Alabama Jazz Hall of Fame. The city’s rich jazz heritage, beautifully documented in the two-story museum, runs deep: for decades, Birmingham produced an army of musicians who fed the ranks of the nation’s biggest bands. Musician and educator J.L. Lowe, teaming with city leaders Richard Vann and Richard Arrington, re-imagined the abandoned Carver as a means of honoring the legacy of those musicians; as the city pursued plans for its Civil Rights Institute, the idea of the Hall of Fame developed as a kind of “little brother” to that museum, its counterpart and musical complement. Registered today as a non-profit institution, the center continues and builds upon its original vision.

The Carver offers a range of programs and events, including live concerts, plays, and poetry slams, film screenings, and workshops. The annual Student Jazz Band Festival brings to the Carver stage elementary, high school, and college students from across the state and beyond. Most significantly, perhaps, the Carver pursues its mission of education and community services through its free Saturday jazz lessons, while its instrument recycling program puts instruments in the hands of young players.

For most visitors, the first, best way to get to know the Carver is to take a tour, guided by local legend “Doc” Frank Adams. A consummate performer more than active in his eighties, Adams has shared the stage with Sun Ra, Duke Ellington, and many others; a tireless and passionate educator, he has left a profound impact on decades’ worth of Birmingham musicians. His tour—for five dollars, one of the absolute best deals this city has to offer—is peppered with his own lively anecdotes of music in the Magic City.

Though the Hall of Fame remains open and active with its tours and lessons, the theater space is currently undergoing another round of extensive renovations as it gears up for its upcoming season, to be kicked off with a grand reopening in October. To learn more, to schedule a tour, or to rent the facility for your own event, visit www.jazzhall.com, or contact Executive Director Leah Tucker: (205) 254-2731; ltucker@jazzhall.com.
Posted by M. David Hornbuckle at 8/02/2011 08:44:00 AM