Here's an article I wrote months ago presenting the Birmingham Voice. They have since begun publishing and are holding an event tonight from 7-10 pm at Woodrow Hall.

Go have some fun and contribute to a good cause. 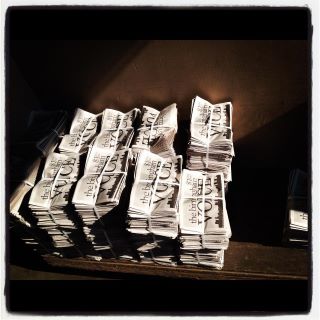 You’ve been in this situation before. You see the man walking toward you, thrift store shirt, tattered pants, a look of purpose. You try to pick up your pace. But even though he doesn’t seem to hurry his pace, he somehow gains on you. You’re trying hard not to make eye contact, while he tries just the opposite. He wants to engage you, make you see him, make you aware of his situation, the plight he finds himself in. He gets closer and closer, he’s going to head you off. He’s going to get you!

You shuffle through the responses in your mind, “I left my money in the car. I don’t give money to strangers. Why don’t you get a job and leave me alone. (Go back into the shadows so I don’t have to know you exist!)” He gets to you. You half grin, half grimace, a response that doesn’t faze him in the least. He’s gotten them all before. What do you do?

This part is a little different, a new phenomenon on the Birmingham streets.

Here’s what you do. You pull out a dollar and buy one of his newspapers. No. Don’t worry. It’s not me. Our newspapers are free, although I might get the same response from some of you.

This man’s not handing you a Birmingham Free Press. He’s selling the next exciting thing to hit the Birmingham print market, the Birmingham Voice (BV). The Birmingham Voice, due to hit the streets sometime this Fall, is going to be a unique voice for the city of Birmingham. It will be written by, staffed by, delivered by, edited by, and sold by Birmingham’s homeless population. Either former homeless people or those currently living on the streets will handle all the day-to-day activities of the paper, giving them well-needed structure, a sense of usefulness, and potentially gainful employment.

William Boyd, the Editor and Chief of the Birmingham Voice, has a lot of hope for the potential of the paper. “The Birmingham Voice is Birmingham’s best opportunity to empower the homeless community,” he says, "to perpetuate its own economic development program and create jobs.”

Along with the paper’s publishers, Ryan and Hope Schumacher, Boyd has been working on the start-up for a long time. Launched with seed money gathered by the Birmingham Coalition for the Homeless and Micah’s House, it is their hope the paper will become self-supporting in a short time. There will be all the things any other paper would have: comics, a food section, what they’re calling “editorial reflections,” opinions, and ads. The paper is intended to be a monthly tabloid. They will also include content on issues important to lower income families.

Although the main focus of the paper will be Birmingham’s homeless and former homeless population, Mr. Boyd says they will be accepting submissions from other writers as well. “Things that are interesting and engaging for our readers.”  The bottom line is it’s going to be a newspaper.