Opponents of Alabama's new anti-immigration law are encouraging Hispanic immigrants across the state to boycott work, school, and shopping. The strike may last between one and five days. Its purpose is to demonstrate the impact Hispanic immigrants have on the state's economy. Word about the strike has been spread on Spanish-language radio and television, through the internet, and by word of mouth.

Several area businesses that depend on immigrant labor are closed today in support of, or as a result of, the strike. Rojo management placed a sign in front of the restaurant saying that they were closed in opposition to the immigration law. Rojo's Facebook page indicated they would be closed today only and would re-open as usual on Thursday. 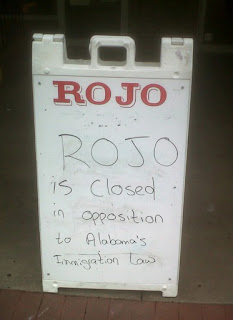