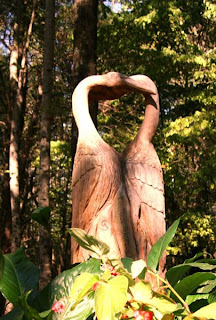 The neighborhood is unassuming, Roebuck Springs, a little historic neighborhood in East Birmingham. Its claim to fame is being the first suburb of Birmingham, established in 1910. Roebuck Springs is full of excellent historic houses, some very large, some very small, some fancy, some simple. It has managed to maintain its character for all these years, the houses displaying historic plaques including the names of the founders of each house and the date of its creation.


One of the best features of the neighborhood is the abundance of trees. The trees are an excellent habitat for wildlife. They have allowed the neighborhood to become an established bird sanctuary. They shade the houses and provide a buffer between the neighborhood and the hubbub of surrounding city life. Of course, where you have trees, you also have falling trees, which down power lines and knock out the cable. Since I used to live there I can assure you this happens frequently. They occasionally fall across yards and, unfortunately houses. After a storm you can drive through the neighborhood and see trees down on almost every street.

This is where I found Andy Cummings.
I was helping a friend move a friend when I drove up the street on a rainy day. I had to do a double take because there, on the side of the road, where there had been a tree, was now a sculpture, an image of three cranes with their beaks pointing skywards. I pulled over and snapped a few pictures with my phone and drove off very impressed, surprised and amazed. I assumed it was just an anomaly. Then a few days later I was driving again and I passed another one. On the side of the road I saw a man wielding a chainsaw, grinding away at a tree stump. I pulled over, hopped out and asked him if the sculptures were his doing. He told me they were. I felt guilty for taking him away from his work. But he was such an interesting guy, we talked for a good while, about life, about the Universe, politics, the economy. I told him about the BFP, asked if I could write up a little something, and he said that would be fine with him. I really had to, because this was such a great thing to find, serendipitous, freakin' cool, not in a fancy garden, not at a craft show, just there in these yards, in this normal neighborhood.

Mr. Cummings, who gets his jobs from word of mouth, has sculptures all over the state. When I met him he was working on an oak tree post, turning it into three bears, stacked one on top of the other. He says the customer just tells him what they want, then "It's like whittling, you just take out what isn't supposed to be there." When neighbors see what he’s up to many ask him about their own trees. In this way he just goes from project to project.
One of the most fascinating things to me was actually, to be crass, the price. I won’t go into detail, but the cost of having an extremely cool sculpture in your yard is so reasonable that I was shocked. It's close to the cost of simply having the tree removed and the stump ground by a tree service. Mr. Cummings also builds “rustic” play sets and many other custom wood structures. He likes to salvage wood, especially cedar. And he certainly puts it to better use than the city filling up a landfill with it. I highly recommend checking out his website and giving him a call if you need some custom woodwork, or if you need to feel better after the tree in your front yard takes out your porch.
www.andycummingsart.com 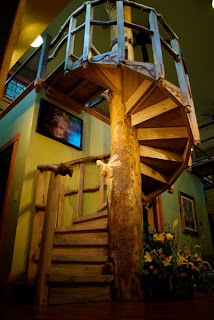 There's been outrage today over a hideous comment that festered for hours on Sarah Palin's Facebook page. The comment was allowed to remain on the page while anything that might damage the conservative star's political standing was vigorously deleted.

Several watchdogs of the blog-o-sphere noticed and discussed the radically self-serving practice.

Here is the comment in its entirety, "It's ok. Christina Taylor Green [the nine year old girl killed in the Arizona shooting] was probably going to end up a left wing bleeding heart liberal anyway. Hey, as 'they' say, what would you do if you had the chance to kill Hitler as a kid? Exactly."

Here is how awful, heated, and hysterical the public discourse in this country has become. This opinion was meant to be satire and no one noticed. Granted, its not on the level of Swift's "A Modest Proposal," but if you take just a moment to really read it, (and read the discussion leading up to it) its an obvious parody.

Unfortunately for Tina King, her post fit in all too seamlessly with the hateful bile being spewed onto Sarah Palin's Facebook page. It's very sad to know that King's satire was immediately believable as the opinion of one of Palin's followers.

"I want to apologize for what was apparently an ill fated attempt at satire," Ms. King said. "I posted a comment that was meant to been seen as a brutal commentary on the violent rhetoric that has become a staple of the political discourse is this country."

Unfortunately, the "political discourse in this country," among Palin supporters is irrevocably saturated with "violent rhetoric." So much so, that an insane statement of rage passed as just another mainstream opinion of a popular and influential organization.
Posted by The Birmingham Free Press at 1/11/2011 05:12:00 PM 1 comments 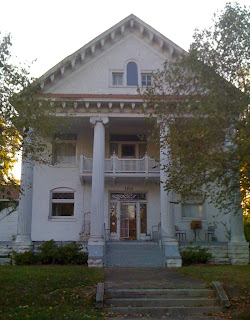 The Musician's Cooperative of Birmingham will open its doors for the first time on February 1st, 2011. The 16 bedroom mansion is located in Birmingham's historic Norwood neighborhood. It will provide nearly 20 local musicians with affordable housing, practice space, and recording facilities.

The cooperative is part of an initiative to assist passionate musicians in networking with like-minded individuals. Members of the cooperative will work together to share resources, knowledge, and inspiration. “Its like a brotherhood,” says co-founder Tyler Trierweiler, “we feed off each other's creativity”.

In the past, the building housing the cooperative has been home to a bank, a reception hall, and an insurance company. The updated space will feature an in-house recording studio, rehearsal lounge, video editing suite, communal kitchen, meditation room, 5 bathrooms, and 16 bedrooms. Members pay $300 a month, including the cost of utilities. The building is zoned commercially, and founders of the cooperative are planning to create a coffee and variety shop inside the mansion which will be open to the public and run by members living there.

The Musician's Cooperative of Birmingham is a spinoff of another location which has seen great success in South Bend, Indiana. Like the South Bend Cooperative, the Musician's Cooperative of Birmingham will be democratically run by the residents living there. Regular events are to be hosted by the co-op including Sunday night dinners, weekday jam sessions, group meditations, and monthly house shows. Members work together to facilitate new projects that benefit both the cooperative and the community.

The Musician's Cooperative of Birmingham continues to seek new members before its opening on February 1st. Membership at the cooperative is open to all musicians and artists. If interested in moving into the house visit
www.themusicianscoop.com for more information.
Posted by The Birmingham Free Press at 1/01/2011 06:41:00 AM 0 comments