The Queen of Birmingham Burlesque

When Jezabelle von Jane moved to Birmingham five years ago, something was missing. In the Northeast, the burlesque revival had been growing for at least a decade, but nobody was doing it in Birmingham. So she took matters into her own hands and created the Magick City Sirens. Later, she also founded a male burlesque group, the Billy Club. 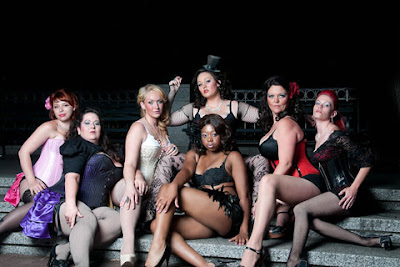 Burlesque shouldn't be confused with the type of exotic dancing or stripping you would see at the Furnace or Sammy's. Burlesque is, in fact, a very old tradition in the entertainment industry, having first become popular in the 1860s. Typically, it features broad comedy, music, and dancing, as well as artful striptease. In its modern interpretation, it may include performance art in many forms.

The strip tease is certainly still a part of it though. Von Jane was actually introduced to burlesque when she was working as an exotic dancer in Boston as a college student. "Someone came up to me and said, 'You dance really well, and you're really funny. The [Local burlesque troupe] Boston Baby Dolls may be interested in you.' So I went and auditioned. They took me under their wing. And that's how it started. I got the bug, and once you get the burlesque bug, there's no getting rid of it. It's like herpes. It's there forever."

Von Jane's Magick City Sirens do a good bit of travelling to other cities in the Southeast, and they have performed alongside local troupes in Atlanta, Huntsville, and Nashville, among others. According to von Jane, each troupe approaches burlesque in a unique way. For example, she loves the Pink Box Burlesque troupe based in Tuscaloosa, but, she says, Pink Box does more 1940s style burlesque while her Sirens are more influenced by Vaudeville and do more gender-bending types of performances.

The Sirens also change their theme and focus frequently. This year, they have been focused on appealing to the gay community in Birmingham, performing with drag queens at Al's on Seventh in the Lakeview district. Their theme this year, von Jane says, is "Glamour and Broadway."

"I haven't quite decided what I want to do for next year," von Jane says, "but I want to shake things up. We don't replicate shows. Once we do a show, it goes into a vault."

At a recent performance, the mother of one of the Sirens was in the audience. Von Jane says this is not unusual. "I'm very close to the parents of my girls when the girls are very young," she says. "I encourage them to come down and see what we do because I'm very proud of what we do. They see it, and they love it." Two of the troupe members' mothers even help the group with costumes. Von Jane's father has even performed with her in one of her routines.

Von Jane herself has kids. She does say that it's important to keep work and family separate. "When your husband is the lead singer of [local hard rock band] Selling Mary, and you are the burlesque queen of Birmingham, it's very important to keep these things separated."

If women (or men) are interested in learning more about the art of burlesque, von Jane encourages them to contact her about classes. She says, "If someone wants lessons, all they have to do is contact me on Facebook and ask me. I do private lessons as well as formal lessons. I like to do private lessons for those who are a little shy because it doesn't make any sense for you to come in a pay me if you are going to be insecure about yourself. I've found it's easier for a lot of women if it's just me and them. I can learn about them and what they are looking to do for themselves."