Alabama-born Robert Sherer is an internationally renowned artist who has represented the US in the Triennale de Paris, the Florence Biennale, and numerous other exhibitions throughout the country and the world. Sherer spent much of his career painting beautiful and haunting figures in a masterful style and later moved on to producing purposely-kitsch pyrography (wood burnings) and then began drawings with blood.

Some of the blood the artist uses is from himself and some comes from an HIV positive friend. Much of Sherer’s work focuses on the male figure. This, along with the blood drawings, has generated considerable controversy. His work has been censored on several occasions, including once in 1994 by a (now-defunct) commercial art gallery in Birmingham. In that case, the gallery had issues with Sherer’s nude male paintings, which any reasonable person would consider sober and conservative. The artist placed the male figures in traditional female poses, which makes the controversy even more absurd and highlights the message that Sherer was obviously trying to get across.

In an interview with Sherer, the artist shared his thoughts on art, philosophy, and the Birmingham art scene

BFP: Did you feel you needed to leave Alabama in order to pursue your artistic career?
RS: Yes, but not just for my art career. At the time I was a burgeoning leftist, homosexual, and punk rock atheist artist. From 1974-79, I spent a lot of time in Birmingham searching for my tribe before realizing that they were not to be found. The counter culture scene, the visual arts scene, and the academic art scene were all really complacent at that time. The gay scene was the worst; it was like some Joe McCarthy wet dream where paranoia reigned supreme. The brute force unleashed by the city upon the black community for their resistance was still very fresh in the minds of the gay community.

Somehow in the blur that was the late 1970s, I did find some of my tribe one evening at a Patti Smith concert at Brothers Music Hall in Homewood, but they turned out to be cool kids from Atlanta who made the drive to see Patti. Upon meeting them I began plotting my course toward the capitol of GA.

BFP: Why do you imagine there is still a stigma associated with the male nude?
RS: The stigma exists because most men can’t handle the fact that the sight of the male nude sexually excites them. The feelings they experience contradict their heterosexual programming and thus threaten their sense of well-being. There are several studies indicating that homophobic reactions and homosexual desires are inversely proportional.
"The lady doth protest too much, methinks."

BFP: Do you believe that your experience at Walker College in Jasper was substantially different from your later studies in more traditional art schools like Rhode Island School of Design?
RS: Comparatively, my experience at Walker College in Jasper proved itself to be superior to most of education at larger universities. I was very fortunate to be embraced by two remarkable mentors at that small school: Hank West and London Bridges (yes, that is her real name). These two took me under wing and provided me with many intellectual pursuits and cultural experiences. Hank taught me how to survive as a gay man in the South, and London taught me how to be an artist. She gave me my first ever art show in Birmingham, and it put stars in my eyes. These two gay mentors created a magical curriculum for me.

BFP: As craftsmanship plays such a vital role in your work, did you find that places like RISD aided this aspect of your development or did you basically have to teach yourself to draw and paint?
RS: My father instilled a sense of craft in me at any early age. Most of what I know about the technical aspects of art making I learned via observation and mimicry. The only thing of value that RISD gave me was social connections into the New York art scene.

BFP: How is the Birmingham art scene perceived from the Atlanta area, if at all?
RS: To be perfectly honest, during my thirty-two years in the Atlanta art scene, few people have ever mentioned Birmingham in any context other than the famous black church bombing and its revisitation by Eric Robert Rudolph. Last year, however, the RACE*SEX*POLITICS*RELIGION* (what not to talk about) exhibition at Space One Eleven caused some talk around Atlanta due to the fact that several well-known artists were in the show. Yes, I was among them but I had great reservations due to my history of having been censored in Birmingham.

BFP: Do you feel growing up in a small town in Alabama has influenced your art?
RS: Yes, my upbringing in the rural South gave me a deeply-felt appreciation for the land and for history. It also provided me with beautiful settings for my awakening as a gay man. I dare say that my American Pyrography series of art works wouldn’t even exist were it not for the memories of my youth in Jasper, Alabama.

Information about Robert Sherer can be found at www.robertsherer.com.

In the fall of 2012, the Kennesaw State University Press will publish an art book on the subject of Sherer’s Blood Works series. The book, tentatively titled Blood Works: the Sanguine Art of Robert Sherer, will be approximately 150 pages in length with 50 color plates of artworks. 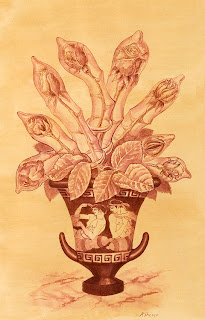 Several notables from the art world are contributing to the book: contemporary art historian Dr. Dinah McClintock has written the primary essay for the book, noted author and feminist historian Helena Reckitt has interviewed the artist, Sherer has written a chapter of Artist’s Commentary and artist Matt Haffner photographed the original artworks for the book plates.

There is a chapter of the book called Artist's Commentary. Here is the text about the piece shown to the right.

A safe sex bouquet about personal protection for circuit party boys. Initially, I was playing with the simple association of the brand name of Trojan condoms with the ancient Trojans. I am intrigued by the idea that the Trojans were destroyed because they let down their guard and allowed themselves to be penetrated by a magnificent animal with hidden dangers. The scene of reclining party boys with their phallic-shaped pillows I copied verbatim from an actual Greek vase.
Posted by M. David Hornbuckle at 9/19/2011 11:38:00 AM