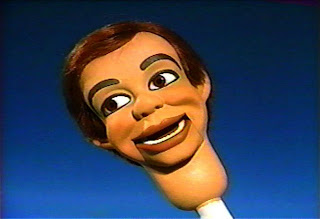 The Found Footage Festival, the acclaimed touring showcase of odd and hilarious found videos, will debut its brand-new show in Birmingham this month. Hosts Nick Prueher and Joe Pickett, whose credits include The Onion and the Late Show with David Letterman, are excited to present their new lineup of found video clips and live comedy on Saturday, March 26th (8 p.m.) at the BottleTree (3719 3rd Ave. South). They are also proud to announce that the show will be preceded by a 25th anniversary screening of the legendary short documentary, "Heavy Metal Parking Lot." Tickets are $10 and are available at www.foundfootagefest.com.

The Found Footage Festival is a one-of-a-kind event showcasing videos found at garage sales and thrift stores and in warehouses and dumpsters throughout North America. Curators Pickett and Prueher host each screening in-person and provide their unique observations and commentary on these found video obscurities. From the curiously-produced industrial training video to the forsaken home movie donated to Goodwill, the Found Footage Festival resurrects these forgotten treasures and serves them up in a lively celebration of all things found.

Among the new clips to be featured in the Volume 5 program:

-Self-hypnosis videos about how to be a better lover, businessman, and bowler
-A 1986 home movie taken during a debaucherous weekend in Florida
-A collection of ventriloquism how-to videos that will forever haunt you
-A brand-new compilation of exercise videos featuring Cher, Lyle Alzado and the American Gladiators

The Found Footage Festival was founded in New York in 2004 and has gone on to sell out hundreds of shows across the U.S. and Canada, including the HBO Comedy Festival at Caesars Palace in Las Vegas and the Just For Laughs Festival in Montreal. The festival has been featured on National Public Radio, Jimmy Kimmel Live, and G4 TV's Attack of the Show, and has been named a critic's pick in dozens of publications, including The Village Voice, Los Angeles Times, San Francisco Chronicle and The Chicago Tribune. The FFF can also be seen twice a week in a popular web series on The Onion's A.V. Club, in the hit documentary "Winnebago Man" and in a forthcoming book by Running Press.

Nick Prueher and Joe Pickett began collecting found videotapes in 1991 after stumbling across a training video entitled, "Inside and Outside Custodial Duties," at a McDonald's in their home state of Wisconsin. Since then, they have compiled an impressive collection of strange, outrageous and profoundly stupid videos. Pickett, a writer/director, and Prueher, a former researcher at the Late Show with David Letterman, have written for The Onion and Entertainment Weekly and directed the award-winning documentary, "Dirty Country" (www.dirtycountrymovie.com), now available on DVD. They are also the masterminds behind the Kenny "K-Strass" Strasser yo-yo pranks that hit local morning TV news shows across the Midwest and have since racked up millions of hits on YouTube.

Called one of the "greatest rock movies of ever" by Cameron Crowe, "Heavy Metal Parking Lot" will receive a rare theatrical screening at the Found Footage Festival in honor of its 25th anniversary. Videotaped in a concert arena parking lot before a Judas Priest show in Maryland in 1986, the short documentary began as bootlegged videotape but has since been hailed as an anthropological masterpiece by USA Today, SPIN, VH1, GQ, and Dave Grohl of the Foo Fighters. For more information about the film and directors John Heyn and Jeff Krulik, visit
www.heavymetalparkinglot.com.

The BottleTree is a live music venue with an emphasis on national touring acts, and also a wonderful restaurant that serves an eclectic mix of food that caters heavily to vegetarians and features locally grown, seasonal vegetables. The venue is located at 3719 3rd Ave. South in Birmingham. Tickets to the Found Footage Festival are $10 and are available at
www.foundfootagefest.com or at the door.
Posted by The Birmingham Free Press at 3/18/2011 12:22:00 PM