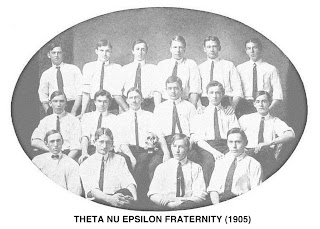 The photo of the founding crew from the 1905 Theta Nu Epsilon fraternity at the University of Alabama in Tuscaloosa is creepy as hell. It looks like something from a horror movie. The skull really adds to it. These were the original Alabama “skulls.”  The fraternity is associated with Yale’s Skull and Bones and has been controlling the politics at the university, and to a large degree the state, for the past century. The group has often been accused of rigging school elections through bribery and intimidation. It almost always wins.


Here is an excerpt from the campus newspaper, the Crimson White, from 1913 describing an early initiation into the group when it was mostly known for its colorful promenade:

Eight men were taken into ‘Skulls’ last Friday night. The initiation of the ‘Skulls’ is somewhat public in its nature, and the parade yesterday afternoon was one of the most original and [ludicrous] that the people of Tuscaloosa and the students at the University had ever witnessed. This “Pee-Rade” was led by Richard Foster, who, in the guise of a negro, wore a scarlet blazer over a dress shirt, pink pajamas for trousers, and carrying an old broom for a baton. He was followed by Pete Jarman, another blackface who was garbed in dress attire also…After Pete came “Judge” Glenn, wearing a lavender dress, pink stockings, a black, jaunty cap covered with a grey veil, and with his cheeks painted, and his eyes blacked until he looked like a militant suffragette or a chorus girl…Sidney Smith, another pajama man, followed Pratt, and after Smith came Lister Hill, who was jauntily attired in a part dress suit, part pajama effect that was most stunning.

That’s Lister Hill, as in Lister Hill Library at UAB, Lister Hill National Center for Biomedical Communications in Bethesda, Maryland, and Lister Hill six-term Democratic senator of the great state of Alabama. Lister Hill, freemason and “Skull” of the Theta Nu Epsilon fraternity. There are many prominent members of Theta Nu Epsilon: Don Siegelman, Richard Shelby (though he will deny it), Bill Blount, your boss, everyone who is anyone in the state, etc.

Dubbed the “Machine” in 1928 by the Crimson White, the fraternity (now a group of fraternities and sororities) has welded substantial influence over the university’s politics and various positions of power by managing to control student elections through various means, some legitimate, many questionable.

Here is what the Crimson White had to say about the organization in 1949:

Today, you hear very little about Theta Nu Epsilon on the campus. But the so-called ‘machine’ is still with us—operating in after-hours secret meetings, getting together its slate of sure-to-win candidates for the coming student elections.

Thus a potential 2500 votes are organized for every name on the ‘machine’ slate each year. A winning proposition? It can’t lose. It can’t as long as no party of equal strength exists on the campus—and we’ve yet to see one that proved effective.

Unknown to the vast majority of students at the University of Alabama but nonetheless true is the fact that political life, membership in many ‘honoraries,’ and, indeed, even to some extent social life on this campus is dominated and controlled by a well-organized political machine. Ask any of the bigwigs of the campus and of the machine about its existence, and they will respond with the innocent expression of a newborn babe, and ask, ‘What machine?’ They believe that the students of this campus are so naïve as to swallow so incredible a line.

The Machine is bad for this campus. Obviously, it steers control of student activities into the hands of its members, leaving those outside its ranks to do as best they can against serious handicaps. The Machine is a source of much-talked-about student apathy, as Joe College sees positions of leadership going to the same clique year after year. It is a clear breach of the democratic ethic, secreting much of the working of student government.

In the 1960s a group was formed in opposition to the Machine. The Mallet Assembly managed to get one of its members, Jim Zeigler, elected to student body president in 1970. Soon afterward, Zeigler’s room in old Mallet Hall was burned.

In 1991, the Crimson White accused the Machine of stealing 4,000 of its papers the day before campus elections to prevent the students from reading an exposé on the fraternal order. But as powerful as the Machine is, it was incapable of preventing Esquire magazine from running a cover story introducing the “skulls” to the nation that same year. This was soon followed by a series of incidents that started the group spiraling out of control.

In 1992, a female non-Machine candidate for student body president was beaten, cut with a knife, and had a cross burned on her lawn. A note left on her door read, “Machine rules bitch.” Following this, the Student Government Association was shut down for three years. In 1999, a student from the Republic of Congo, Fabien Zing, was threatened and subjected to numerous racial slurs when he decided to run as a non-Machine candidate. It is impossible to say if the secretive group was behind these or the many similar incidents.

The Machine’s iron grip over UA politics influences the attitudes and power structure of the entire state. It is the old guard that is too entrenched to effectively oppose. These sorts of secret organizations are so much a part of American culture it is foolish to try to fight them. If you want to get ahead in Alabama you would be doing yourself a favor by trying to get into the Machine. If you are black, you are probably out of luck. Gay? Forget about it.
Posted by M. David Hornbuckle at 12/17/2011 11:05:00 AM